If you’re a regular here, you’ll know that the Vaude Power Lizard is one of my favourite tents. It’s light and spacious, stable (with some tweaks) and weather proof and can used in all seasons. It’s been kept itself on top of the grab pile for years. Imagine my excitement at the possibility of a super ultralight version. Could it be that a great tent could get any better? Well given that it’s taken me 4 years to get round to this, it might give you a clue. This is the Vaude Lizard GUL. 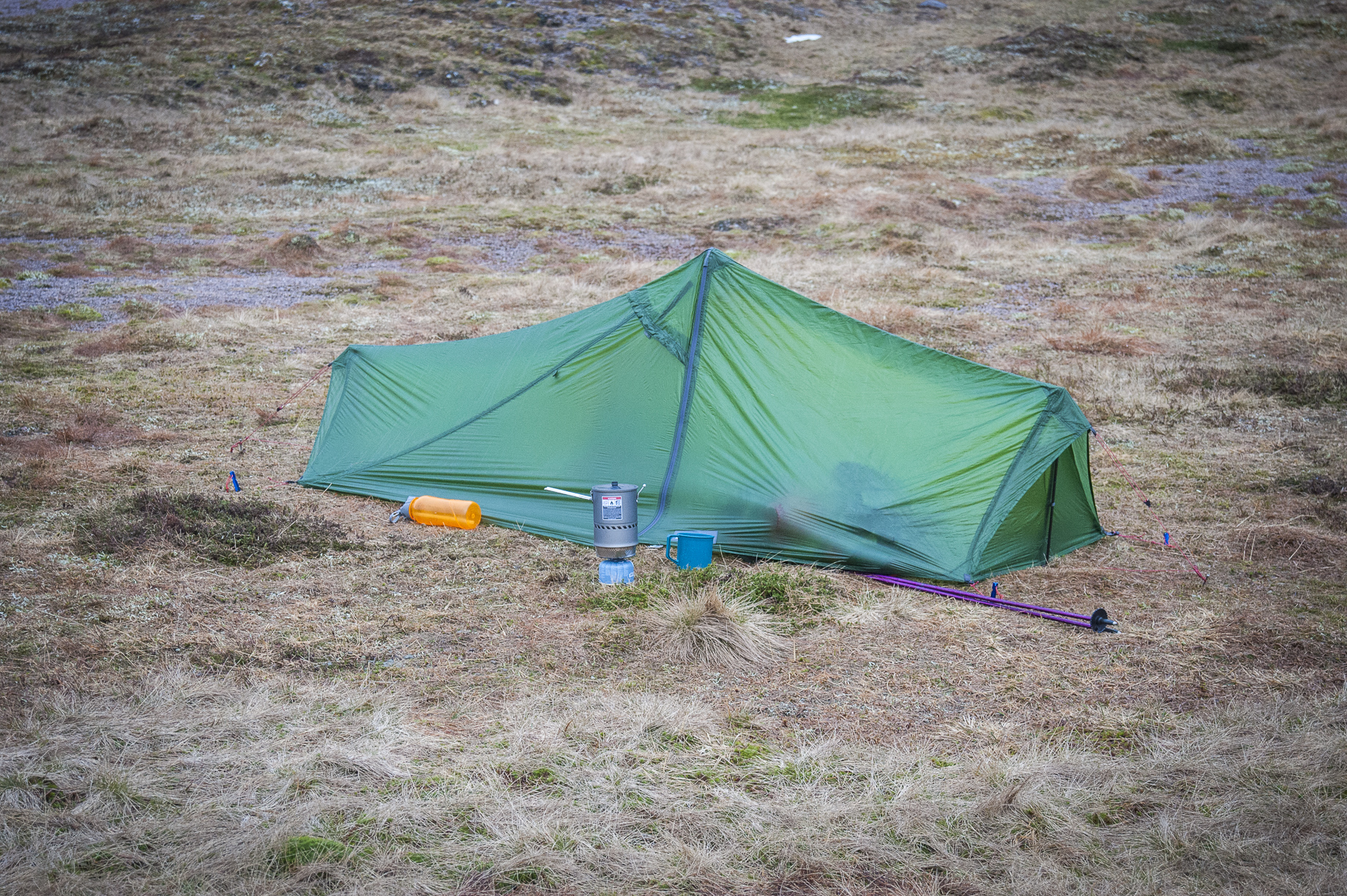 The Lizard GUL is designed to be as light as possible while still remaining recognisable as a double skin tent and it’s intended for 3 season use. The inner is 10D ripstop polyamide, with a tougher 40D floor. The outer is silicone coated 10D polyamide , rated to 3000mm water column, so the materials are light but still robust enough for usage in the highlands. Let’s be honest hydrostatic head/water column is all well and good but it’s mostly bollocks. Generally the higher it gets the more condensation you get and at the lower end you’ll still stay dry unless you’re pitched in a wind tunnel with a firehose attachment. It’s very unlikely you’ll get a leaky tent these days, unless you’ve ripped it or didn’t bother sealing the seams. Anyway, I digress.

The design is no surprise, it’s the usual single hoop with two small end poles that is the Laser standard. In this case though, the pole is a not a full crossover pole, but a cantilever design that is about 2/3rds the length you would expect. With a bit of pegging and tightening, it forms an semi-arch which maintains the shape of the tent. Design-wise it’s a smart way to try to reduce weight. In practice, it’s a bit of a faff to peg out, but it’s surprisingly stable in the wind, once you get used to the idea that your pole doesn’t meet the ground on both sides.

The end poles are just the usual. The front pegs out to form a mini-porch. 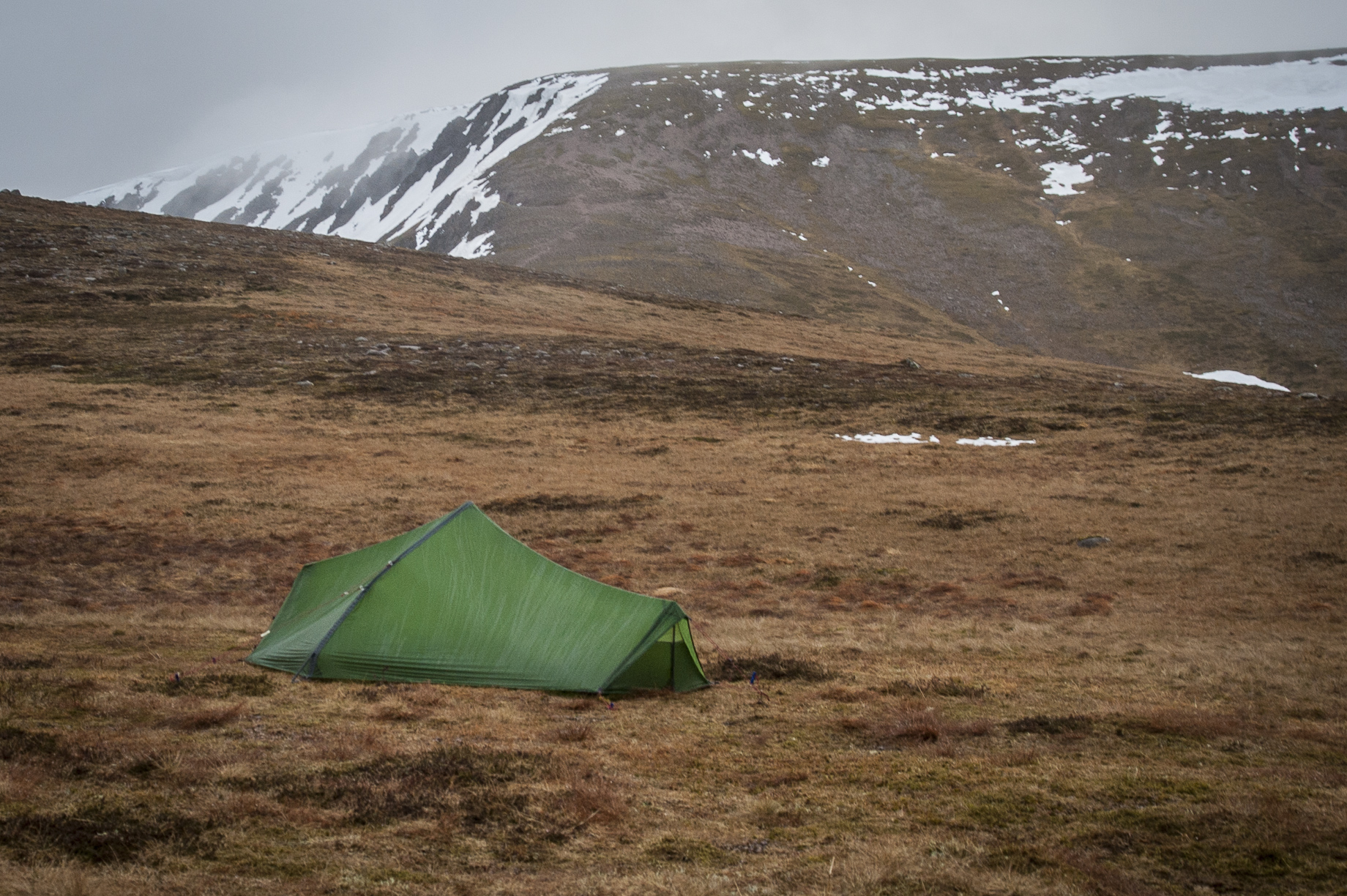 So the design has been tweaked a bit with the pole thing but basically the only way to get that weight down is material choice and the amount of materials used, which brings me to the crux of the thing. When you minimise the amount of material, you make things small and the Lizard GUL is tiny. Annoyingly, frustratingly tiny.

Now, I’m 6’4″, so most things are tiny to me, but I’m not kidding here. The tent is very low to the ground. Getting my arse through the small zip door is like watching a water buffallo being born in reverse. Once I’ve managed to reverse in, I can just fit in with no spare space at either end and with the curve of the roof touching my nose, basically it’s a polyamide coffin. I used this a lot over the spring and summer to try to get used to it. The weight on my back was great, but I found myself walking late into the night to delay the inevitable struggle of squeezing myself into my tiny plastic sarcophagus, and then willing away the hours of darkness so I could get out if it again. Cooking in the porch is impossible, so you’re outside for hot food and drinks in both good weather and bad, and there’s no chance of you relaxing in your sleeping bag with a cuppa unless you remain with your top half hanging out of the door.  I spend enough time being miserable at work, I don’t have a high tolerance for being miserable in the hills.

In terms of weather resistance, it’s surprisingly good, given the minimalist pole. It stood up to strong winds, although I expect the low profile helps here. Waterproofing is good and condensation wasn’t a  problem. There are signs of wear on the pole slot which would suggest it moves more than a traditional pole arrangement in the wind and would likely need beefing up if it was going to be subjected to prolonged use in blowy conditions.

So to get to the point, I don’t like the Lizard GUL. If weight was everything it would be great, but there has to be a balance for me, and this is just stupid. It’s not really a tent, more a posh bivi bag, and not a very good one at that. For a couple of hundred more grams I could have 1000% more joy, which is a no-brainer for me. This one has gone back on the shelf and it’s big brother is back out to play. 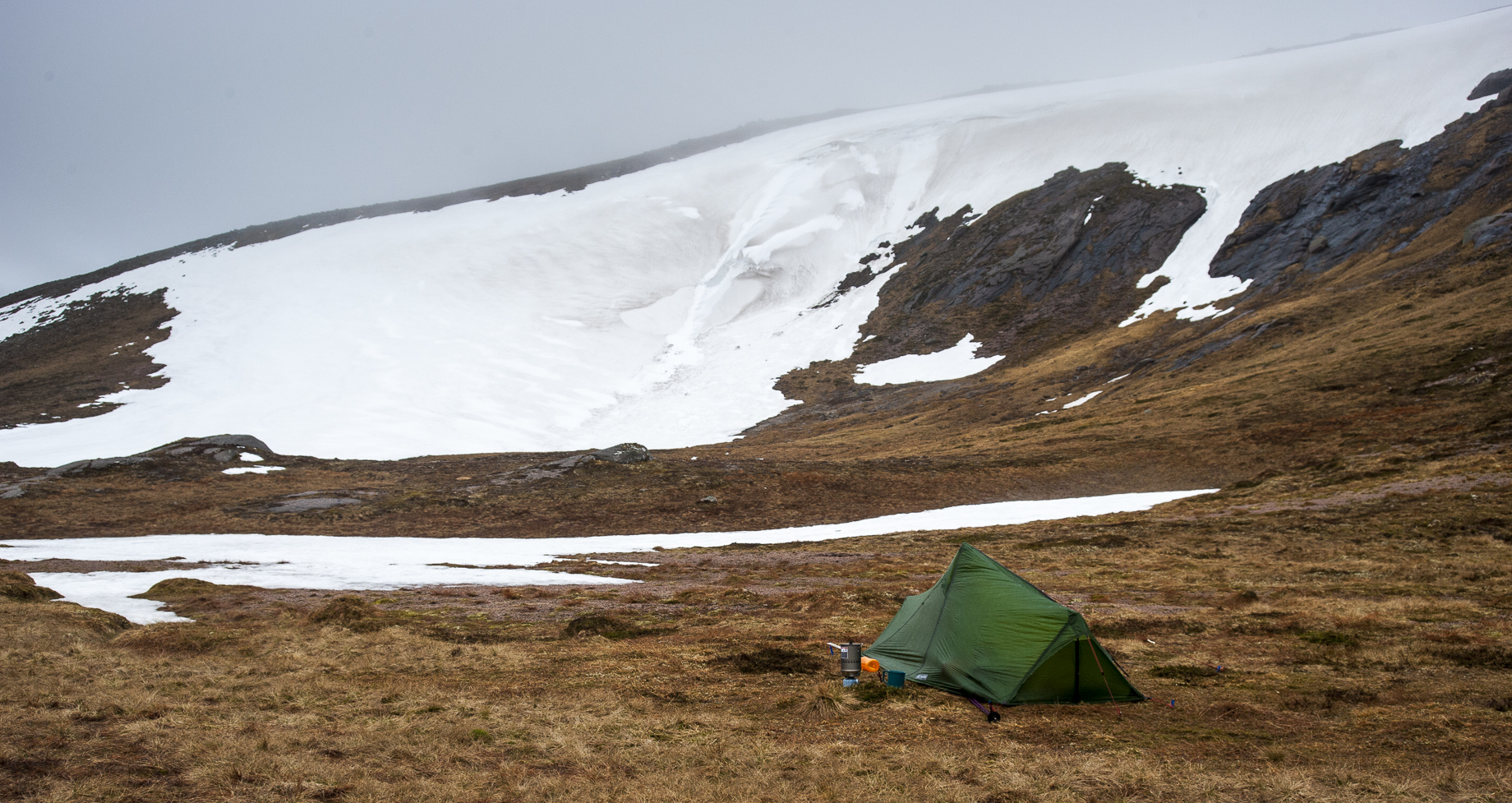 Norman Bradshaw
Thanks for the info, very frank and very interesting. I was thinking it might be time to update my well used, but still my 'go to' tent, the Vaude tadpole, which is now almost 30 years old and still an amazing 1.7kg double skin bombproof tent, however I might not now be looking at the GUL. Possibly a Nordisk Telemark ULW1 might be the next big spend for 2018?
MT
I had a tadpole a while back, it was a decent tent. I haven't tried the Telemark yet, Nordisk did say they'd send me one but it never arrived, I'll maybe chase that up because it looks like a nice tent.
Steve Gahan
Hi Michael I'm glad to have you back here and reading your thoughts. I actually bought the Vaude Pl 1-2 on the strength of your reviews of it and obviously very fond of it. It was the balance of weight, great space, strength and affordability that you spoke of that led me to press the button.I had not long bought a southern cross1 before hand, but I couldn't love it, to cramped for me even though I'm 5'7 small build. Anyway I'm really happy with the PL,love it infact.Its noisy, I get condensation but I honestly dont mind.Ive had it out through the winter which is when I camp most, even had a good few inches of snow at the end of Dec. I agree with you that,if you camp sensibly in the right conditions you can camp right through the year in a three season tent. One thing I was wondering was how you tweaked your guyline pegging points at the front and back? Thanks Micheal steve
MT
The tweaks are pretty minor, I just added dyneema loops with linelocs to both sides so I have a triple stake on each end to stabilise regardless of wind direction. This photo shows them I think, the red guy is the original and the two black and white are the dyneema, it seems to help with lateral stability. 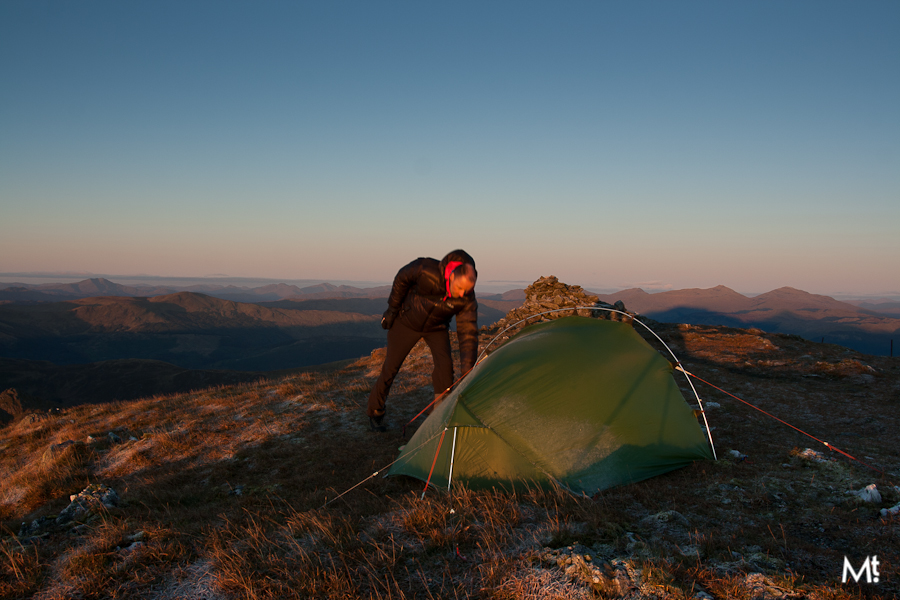