A trip will generally only appear on here if it resulted in a decent photo or two. As you’ve probably noticed, this year has not been a roaring success in that department, my free time managing to coincide exactly with crappy weather. I’ve been up Ben More in Mull again and saw the same as last time: absolutely bugger all. I took a long walk into Fisherfield to have a cuppa in the rain. A planned trip to Torridon with John and Jeff got as far as an all-day breakfast in the Mountain Cafe in Aviemore, then a swift redirection to Glencoe to eventually nip up the Pap of Glencoe in a hailstorm. I took one photo that day, although we did end up in the Clachaig for the night so it wasn’t all bad.

One of the drier walks I’d had earlier in the year was through the woods from Loch an Eilein while the girls were making pottery. It was a wee walk, but had good views into Glen Einich and I made a mental bookmark to come back this way, I’d only ever been up Braeriach from the other side and mostly in winter. A summer jaunt up there went on the hit list.

I was sat at home on the sofa, propped up by my ‘reserved for dad, king of the sofa’ cushion, resigned to my fate of drizzly outings when Christopher Blanchett on the telly uttered the seldom heard phrase “high pressure coming in over the weekend” The game was afoot.

A day later I swung to a halt at Whitewell and kitted up. The tops were still cloudy but it was warm and most importantly, dry.

The walk through Rothiemurchus is always a joy, a reminder of the Caledonian forest of old which used to cover so much of the country. There were birds tweeting, squirrels squirreling and at this time of year, an abundance of mahoosive fungi. I met a couple who were carrying mushrooms the size of rugby balls, who assured me they were edible. I wished them good luck.

The path joined into the more familiar bit, the upper reaches of the Lairig, without the herd of accompanying black flies I had the last time I walked it. Lurcher’s crag was looking particularly inviting in the sun.

It was positively hot as I peched and panted my way up the Sron na Lairig, being passed by merry hordes on their way down. The talk was of it being cold up top but I was overheating, the clouds were thinning and the breeze was light.

When I popped out over the top of the Sron, the view was immense. The Cairngorms really are giant country. The last time I’d been up Braeriach I had nearly succumbed to exhaustion trying to get back to Auchlean through waist deep snow. This time I was in a baselayer and watching for water sources.

I skirted round the coire edge, I’d only ever been here when it was heavily corniced and had gone nowhere near it, now I could take my time and explore, which is exactly what I did. The one great joy of overnighters is not being in a hurry to get anywhere.

I got the summit to myself, which was nice given the throngs I’d passed earlier. Such a contrast to the blizzard of the last time. I followed the top of Coire Bhrochain around, checking out the ridges and buttresses for climbing options for a coire-based visit next time, until the rumbling of my stomach an my empty water bottle got the better of me and I headed over to the Wells of Dee to find a home for the night.

There was already a group camped in the prime spot, so I headed over to the Einich side to give them some room and to get a better view to the west. I’m always amazed by the springs here, it’s like a lovely summer meadow with water bubbling apparently from nowhere, at 1200m. I popped the tent up, got the stove on and sat down to watch the sunset while scoffing chicken fried rice. Marvellous.

I was abed quite early due to being grossly unfit and hence utterly knackered by my earlier efforts. That and the earlier promised cold breeze was starting to bite. I was awake at 0430 and lay with the tent door open looking at the stars, the moon had dipped and so it was a real deep sky view, which I enjoyed so much I couldn’t be arsed messing about with astro-photography.

Come sunrise, there were pockets of cloud in the glens, but the sky was clear and blue.

Too good a day to waste, I left the bulk of my kit in the tent and headed off towards Garbh Coire. It was only after about 40 minutes when things started to warm up I reached into my pack sidepocket to discover it empty. I run a tight ship normally, gloves in the left pocket, hat in the right. In my rush to get moving, I’d left my sun hat in the tent. Speaking as a baldy, this was a big deal. It was a long way back and I’d left the suntan lotion too. I did have a my wooly hat, so i had a choice, burn or climb hills in the searing sun with a beanie on. Happy days.

Sgor an Lochain Uaine was a splendid perch to start a Sunday morning. The opposing bulk of Macdui was a draw like a magnet, and the cliffs of the Garbh Coire we just a constant source of interest. The two wee snow patches were still hanging on in there.

I hummed and hawed a bit at the top, considering whether to abandon the plan to head over to Cairn Toul in light of the headgear problem. The last time I’d been up Cairn Toul I couldn’t see my hand in front of my face. It didn’t take me long to make the choice. Onwards, scarlet scalp and lugs be damned. The boulder skipping was as much fun as always, for some reason I much prefer it to plodding up a track. The top came quickly and the views were knockout. Corrour was a wee green box below and I wondered who was lying there in the grips of a belting hangover while I was on the sunny tops. I looked down on the Devil’s Point with amusement, it looked tiny and insignificant and not at all Munro-like, which along with embarrassing Satan, just showed how big these hills are.

The return leg was slow in the growing heat, my water bottle was dry again, my shiny pate had already combusted completely and my ears were two small smoking holes. A wee plane buzzed up the Lairig, dwarfed to midge size by Macdui. See if you can spot it in the photo.

I got back to base camp for a hat and a cuppa, in that order.

It was shame to pack up on such a glorious day, but the forecast was clear it wasn’t to last, so I decided to head down in Glen Einich, which is a place I hadn’t been in over 20 years. I dropped down the side of Coire an Lochan and even then delayed the inevitable messing about with the camera and scrambling on the pinnacles.

Once into the descent proper, it became world championship level heather bashing, with the occasional sphagnum covered landmine thrown in for an element of surprise. On a baking hot day, out of the wind, it was more than a little tedious, but after the highs of the morning, it was only natural that the descent would be, well, a bit of a comedown. The views up the Glen were a fine distraction.

When I reached the landrover track, I paused to look back up and give thanks to the hill for a good trip and thanks for having reached the end of that bastarding long heathery slope.

The landrover track did what all landrover tracks do, which is to allow you to move at a decent pace at the cost of all joy and foot comfort. I shifted up a gear and motored back to the forest. The section back through the wood was lovely, with the sun starting to dip behind the newly forming cloud and I only had to jump to the side to avoid speeding cyclists about 150 times.

By the time the car came into view I was a combination of deep-fried and knackered. If that’s not a sign of a decent trip I don’t know what is.

Ah Scotland, if you get the weather, you just cannae beat it.

Catriona
Thank you for coming back with your adventures. Always uplifting and inspiring. I doubt there is a plane. Are you chortling at the thought of your readers peering, zoomed in on each feature of the mountain side trying to find a plane shape?
MT
There is a plane, here's a zoomed in version 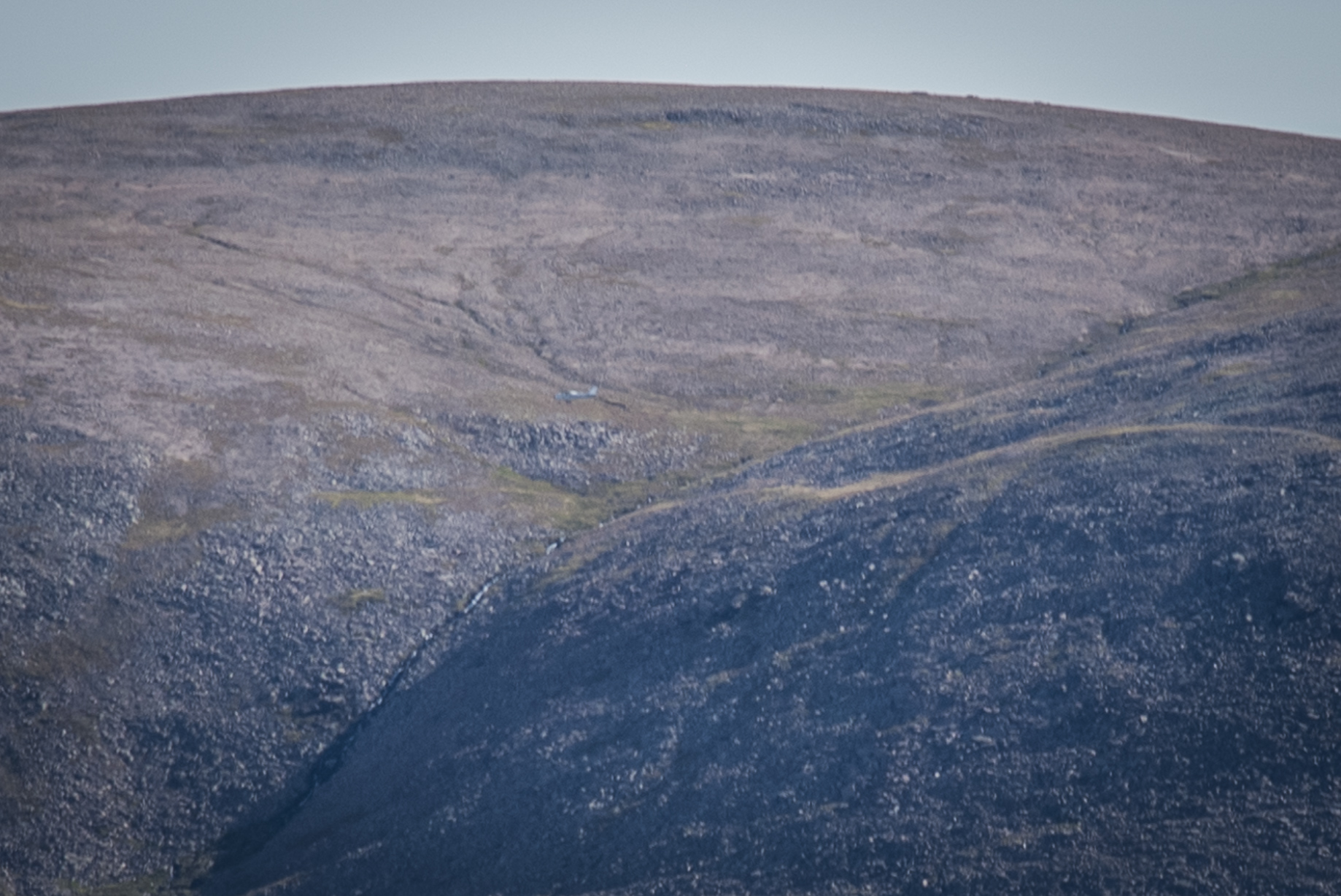 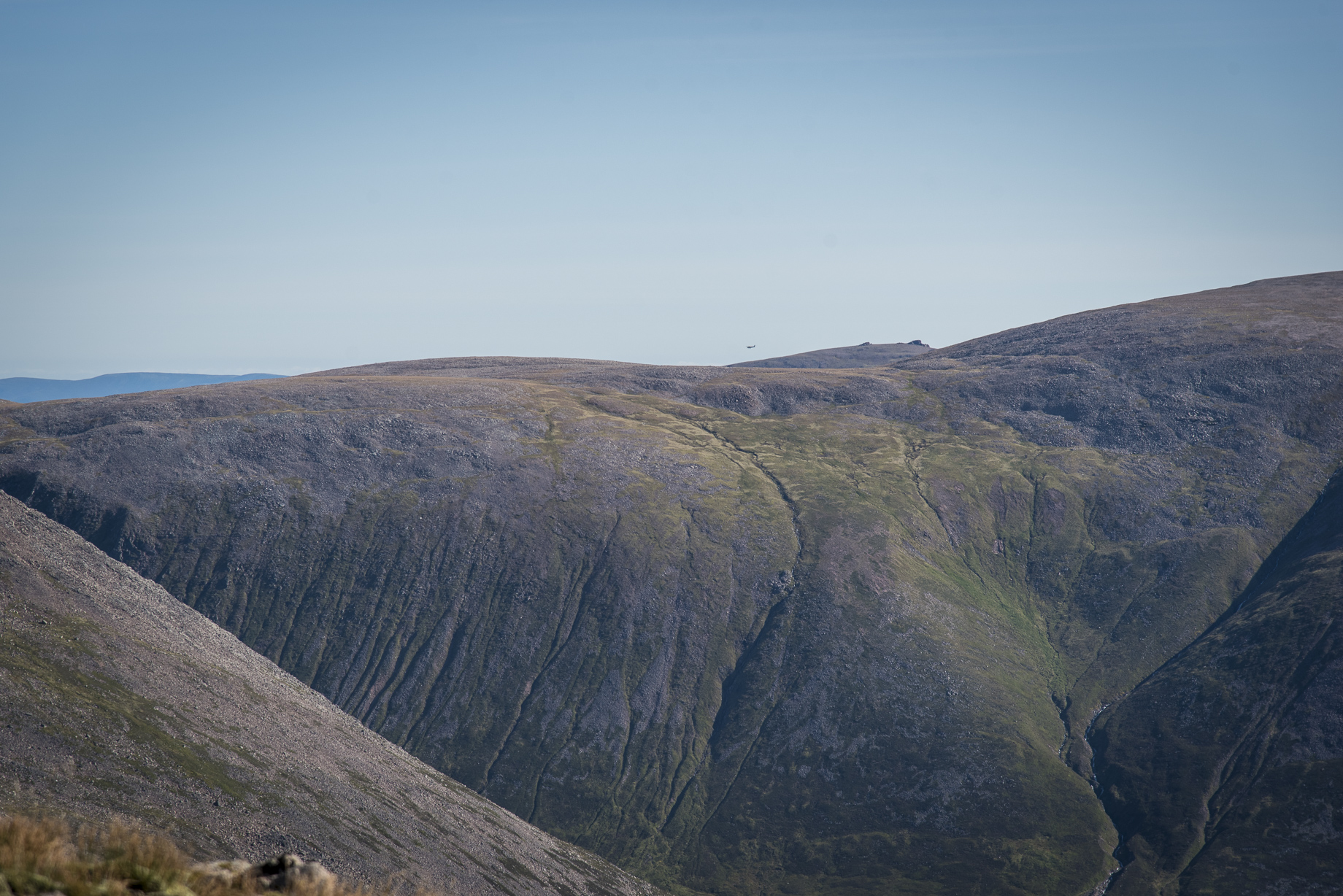 Laurent Tourville-Blanchet
Glad to see you are back outside and posting something new. I really enjoyed looking at your pictures and you even inspired me to start my own blog after relocating near the mountains in Canada. Looking forward to your next adventures. Cheers!