The next mile seemed significant.

I pulled into the carpark in Arrochar. It took a while to find a spot. It was packed, which is exactly what you’d expect on the hottest and sunniest Saturday in living memory, although with my dimming recall capacity that only goes back to about October.

‘Family reasons’ is a phrase you see often trotted out when someone in the public eye steps down or away.  I suppose it’s the phrase I’ll borrow, it’s vague and nonspecific enough. It’s not my story to tell so it won’t appear here. The thing isn’t gone, but it turns out that all serious stuff and no arsing about in the mountains makes Michael a dull boy, so I’m working on a balance. I’ve announced ‘I’m back’ on these pages more times than I can count, maybe this one will stick. The next mile in this journey seems significant.

I headed off up the trail and by the time I hit the second bend I’d run out of variants of saying hello. It was a bit busy. I’d started with the usual ‘hi there’ and ‘hello’, graduated through ‘lovely day’, ‘cracking day isn’t it?’ and variants thereof. By the time I reached the wee bench I’d counted 163 people and I was down to ‘alright?’ and ‘Hi’. It pained me.  I’m not a fun of grumpy hillgoers despite being both a hillgoer and grumpy myself. I always think the very least I can do is acknowledge a fellow enthusiast. Many times I’ve stopped for a chat and learned something new or heard an interesting tale. It’s part of the mountain experience and it’s officially a good thing, it’s just normally it’s on a less frequent basis. I stopped counting from this point.

By the time I passed the Narnain boulders, it was thinning out a bit. A family was heading down and the wee boy exclaimed delightedly ‘it’s easier on the way down dad!’ Oh to have youthful knees again. Mum’s comment from the back of ‘not when your legs are like jelly it isn’t’ brought a smile.

The hordes lessened as I slipped into the shade of the Cobbler and by the time I hit the summit of Narnain I was on my own. Over on the Cobbler I could see a few brave souls threading the needle, but the rush hour had passed. The wind was cold. After a while a couple of stragglers approached. They were surprised about my plans to say the night ‘it’s too cold’ they announced. The wind was getting up and cooling down. 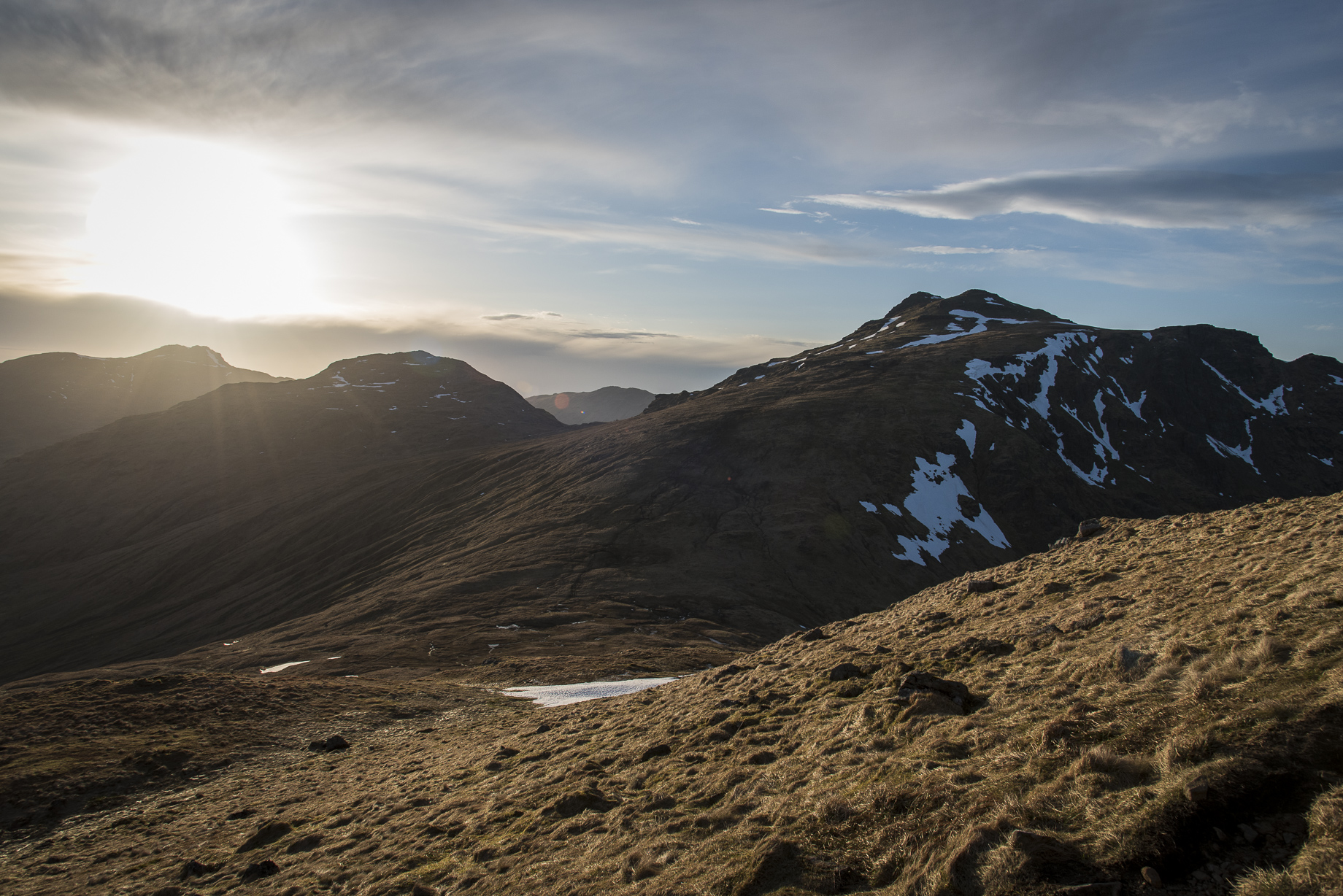 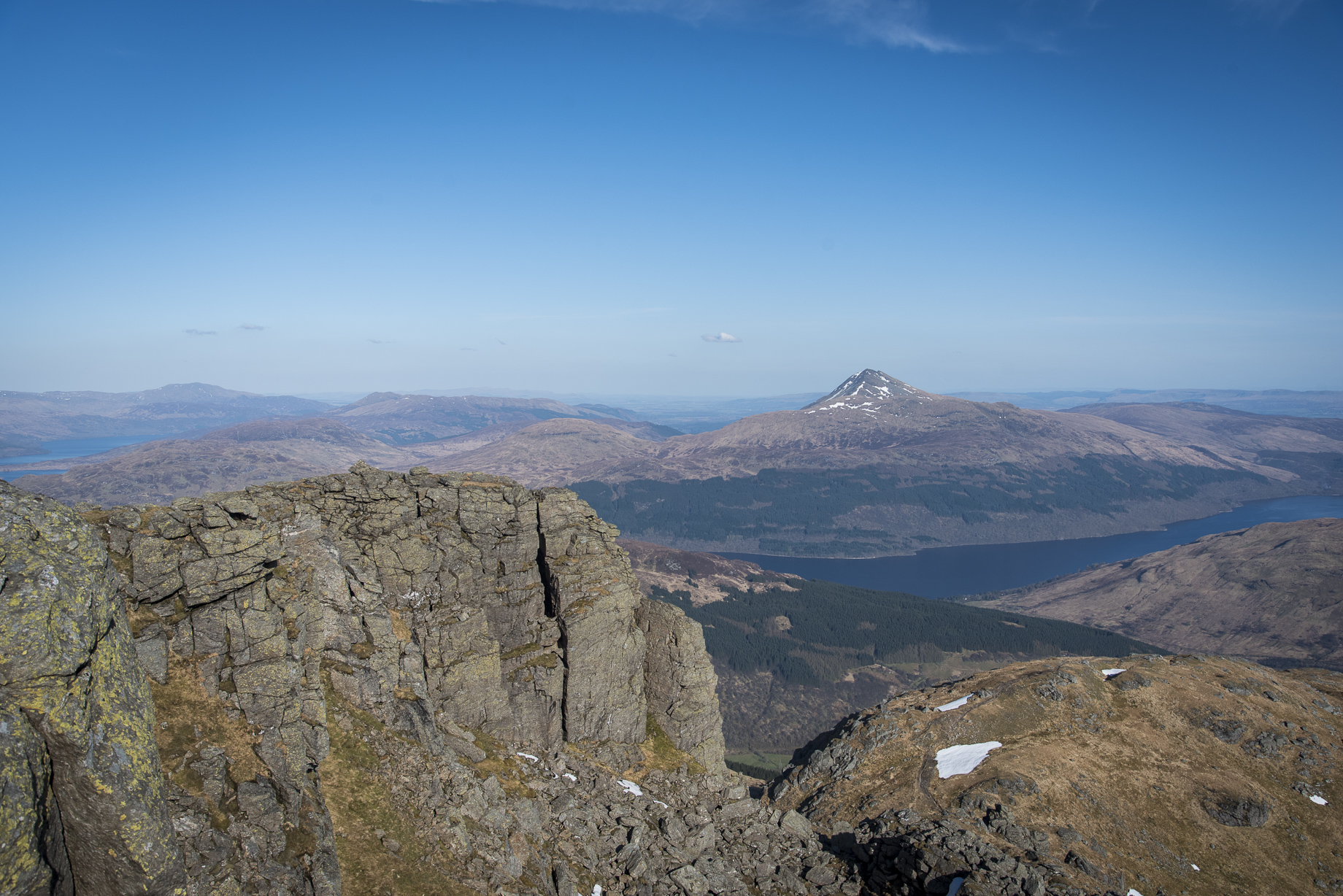 I scuffed about on the summit area for ages. I scrambled and played about on the pillars and blocks around the Spearhead. The rock was warm from the sun. I sat down and got the stove on in a sheltered spot. If there is anything more relaxing than a seat with a cuppa with a bag of biscuits on a sunny summit, I’ve yet to find it. There was no clock to watch, no place to be, just a place to be. That hour stretched out gloriously. My days are ruled by a clock and meeting schedules and never seem to have enough time to get stuff done. On that summit, I had all the time in the world and it was fuel for my soul. 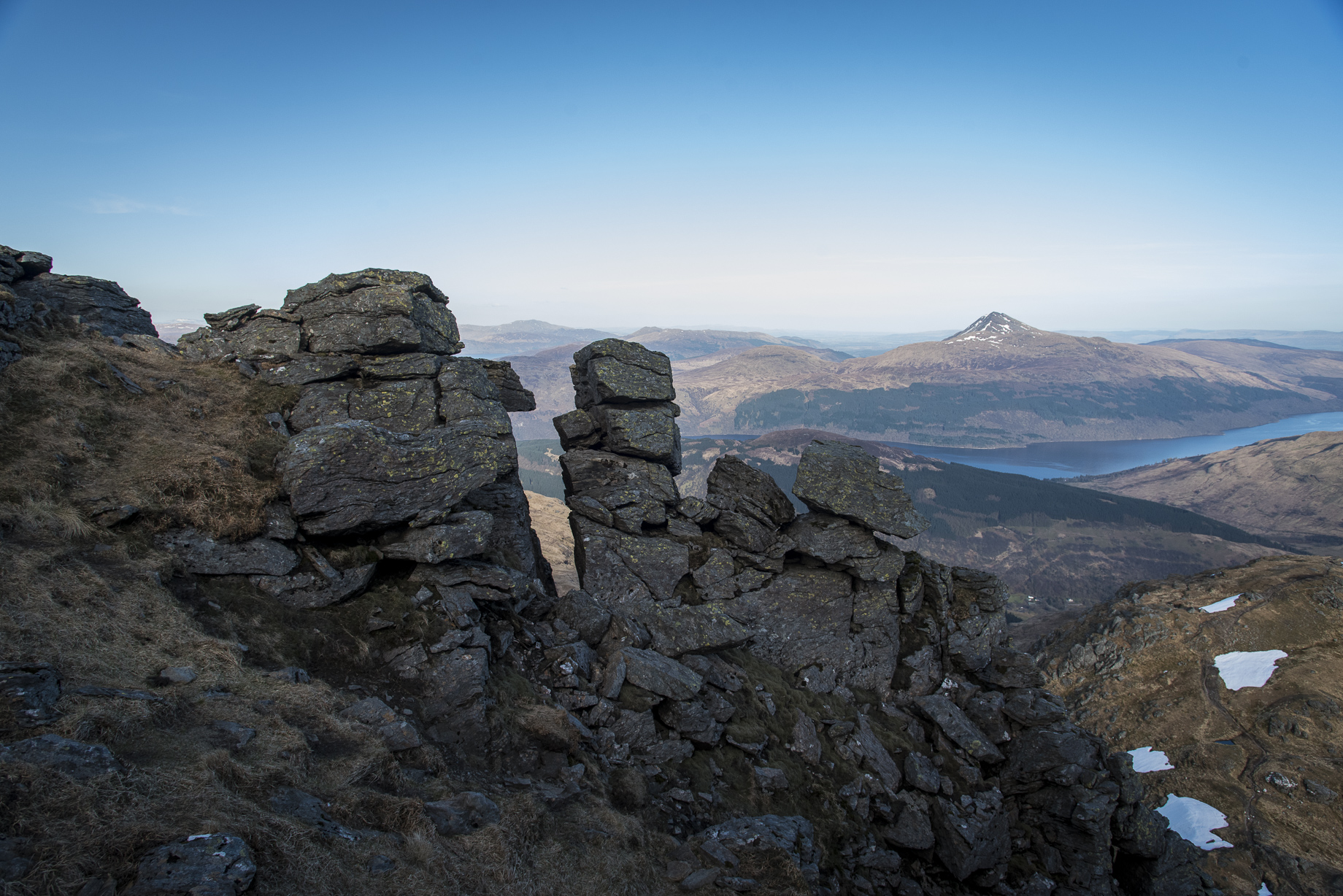 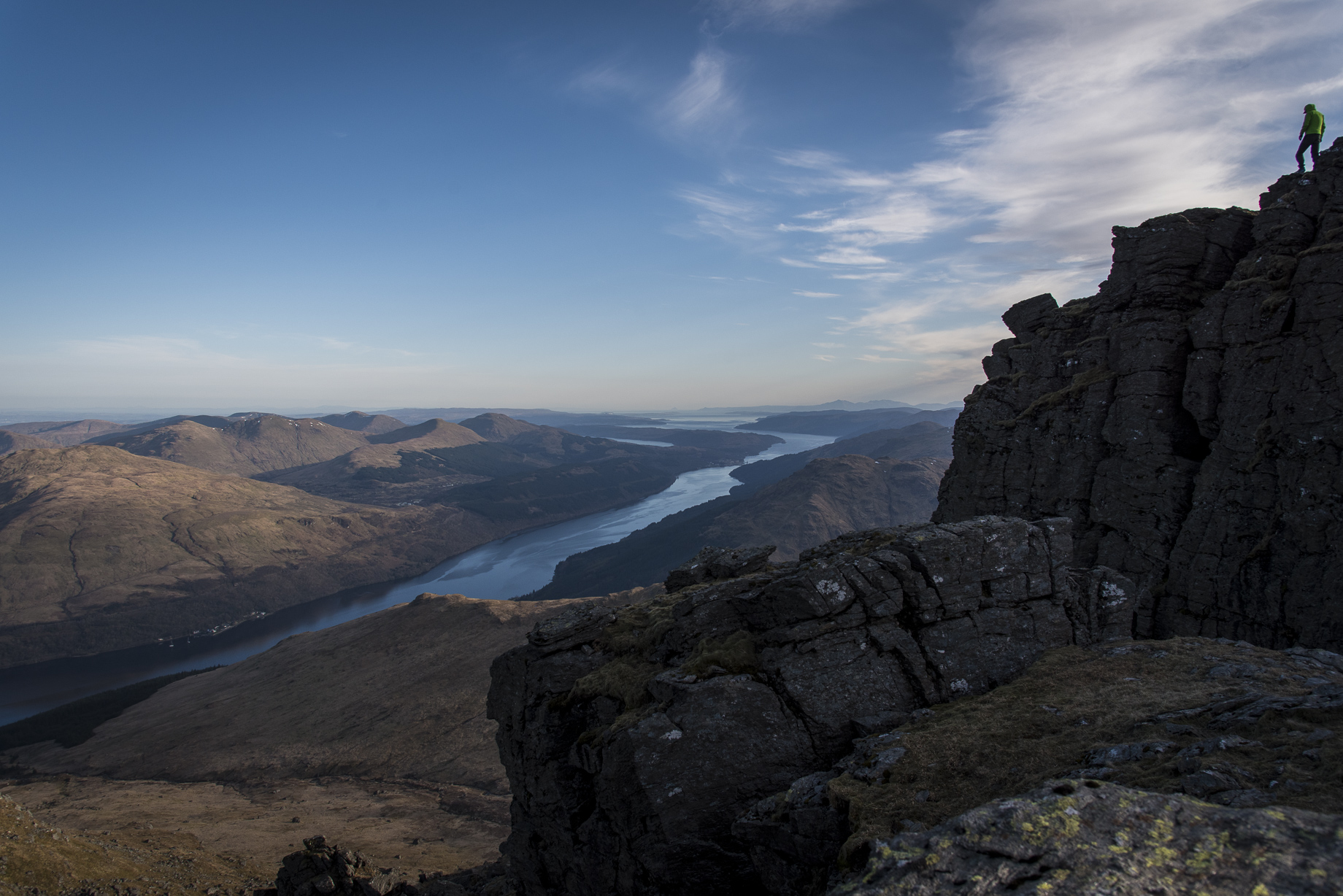 The forecast was not great, the weather map had a cloud with three drops of rain under it and the rock golem was looking suitably unimpressed. Grumpy bugger. 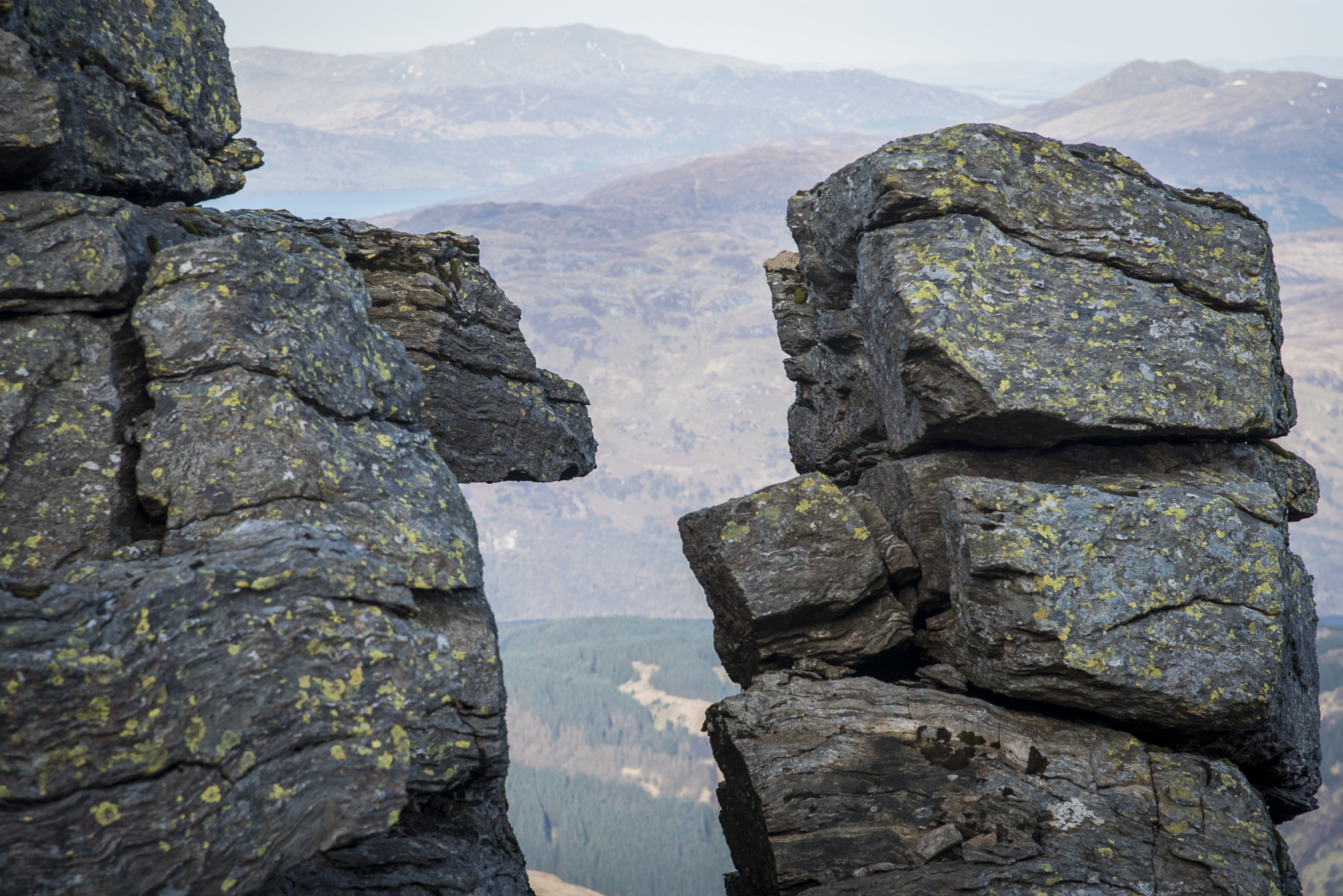 I waved goodbye to my planned campsite and dived off down the steep side towards Cruach Na Miseag and set up shop in a more sheltered spot. The sunset wasn’t spectacular, but I wasn’t there to take photos this time, just to breathe. I sipped hot chocolate and watched the sky darken and didn’t do much at all. I can think of no finer pastime.

My mind went back over previous incarnations of my journey here: my first visit after a long drive from Aberdeen, watching the sunrise from a bivvy under the  boulders; soloing Nimlim’s direct; the struggle up the spearhead in the driving snowstorm; the snow ploughing on Cave Route;  pitching a sea of tents for Petesy’s great gathering. Memories of good times and good people, the gift that keeps on giving. Hi honey, I’m home.

I had planned to photograph the stars, but I crashed out. I hadn’t had a proper nights sleep in at least four months, but this one was a remedy. I was out till just before dawn.

As forecast, the sun brought it’s mates the cloud and the rain and so I was back at the boulders in short order.  I met a chap on the way down who was contemplating whether to continue or not. What a difference a day makes.

The last gift the hill had for me was a massive flesh coloured tent perched overlooking the drop into the forest. There was no sign of life, but whoever had hauled that up the hill deserved a lie in. It made me realise it’s all about getting out, seeking joy and making questionable gear choices. It’s a journey, and the next mile seems significant.

Eric
Thanks for sharing another story. It sounds like you have some great areas for hillwalking near you.