My sunrise alarm went off at ten to four. I stuck my head out of the tent to see wall-to-wall clag. Back to bed.

By six, the mist had lifted and it had brightened up a bit so I got the breakfast on. I could see the full length of the ridge I’d traversed the day before.

I stood and munched porridge and had the obligatory two cups of coffee, then I got packed up and I was Oscar Mike.

The summit of Sgurr an Iubhair was clagged in and it was blowing a hoolie. I had chosen wisely last night. I had the choice to carry on round to Am Bodach or to branch off over the devil’s ridge. I checked the forecast and it said it was gonna be clearish for a couple of hours, then hosing down again till evening. Nah, not again. I turned north, dropped down into the bealach and started up the ridge, casting an eye back over the east, second guessing myself as I went. 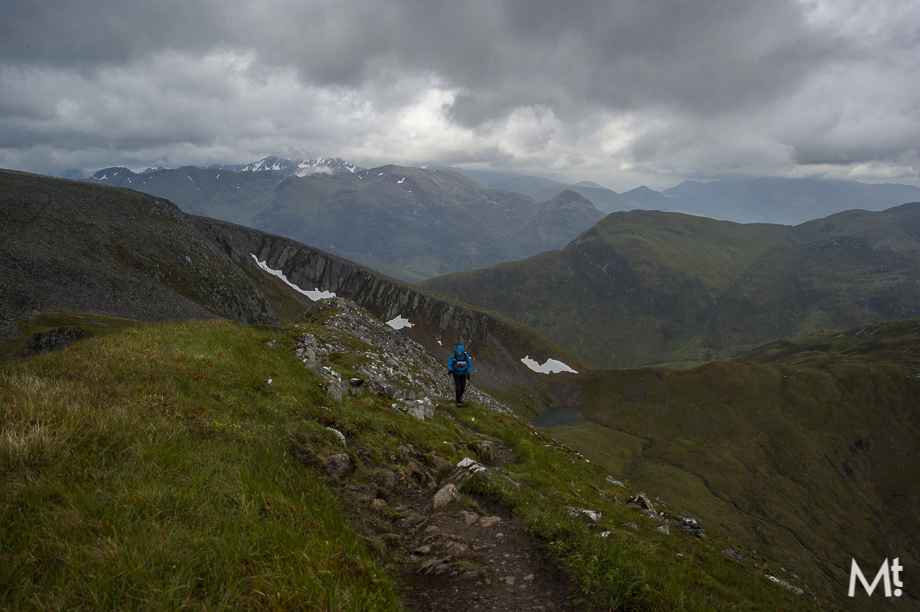 Despite it’s name, the devil’s ridge is very straightforward. I suppose it’s a bit narrow, but there are far scarier outings to be had in the Scottish hills. 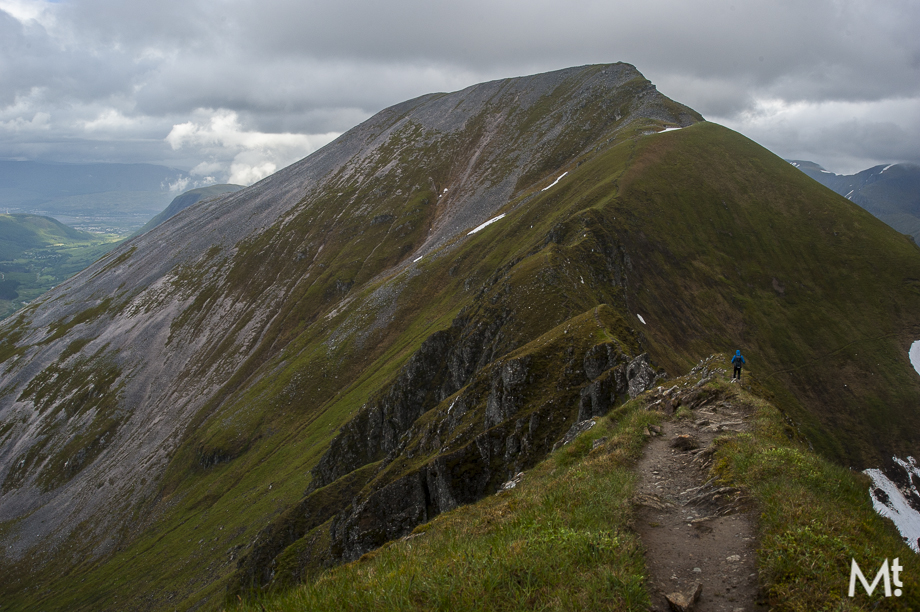 The clag had stayed off the top as I came along then ridge, but when I topped out it was standard issue cairn in the mist territory. There was a huge slab of snow hanging in Lag Gorm, I could see why the MCofS were advising caution, there was a lot of white stuff still around. There was a quick break in the cloud, just enough for me to see the next batch of rainclouds heading my way from Glencoe. I paused for a quick photo for the kids and then set off down the Sron. This was where it had gone wrong previously, a simple nav error in thick mist that had left me with an injury that had recurred for years. 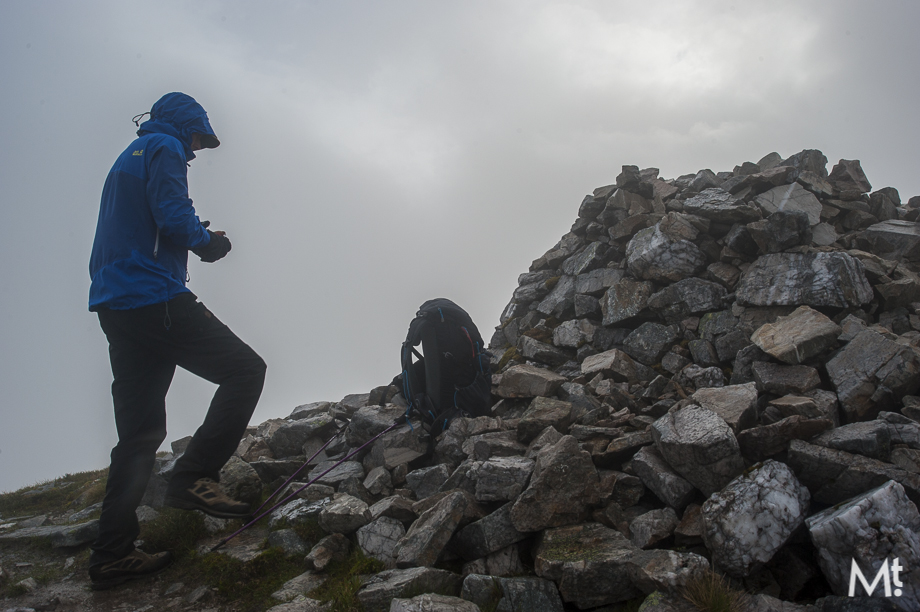 I dropped down below the cloud and could see the way ahead, I was on track. I bumped down through the quartzite with red stained snow suggesting some kind of massacre had taken place here. 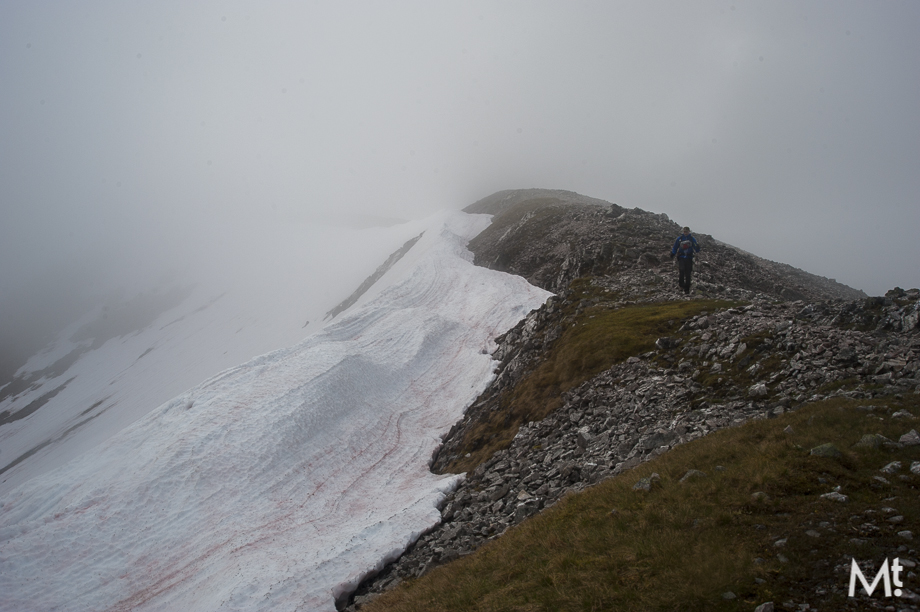 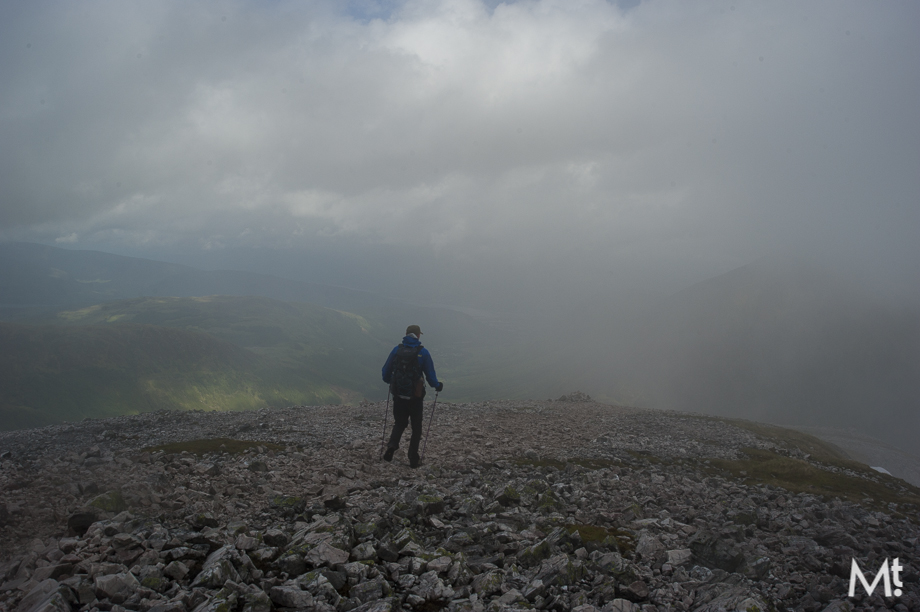 I took a skid in a patch of loose scree and there was a stretching sensation in the right knee, then zap, pain shot up my leg. Not again. The remainder of the descent was slow and I was glad of my poles. The sun broke through the showers and it warmed up a little. I plodded down slowly, on the right track this time but it was still steep. I passed the first person of the day, on his way up at the deer gate and was greeted with the traditional ‘you must have been up early’ which always makes me smile.

I hobbled down the last stretch back the car as the sun warmed my back. Two for two; Sgurr a’Mhaim was winning. 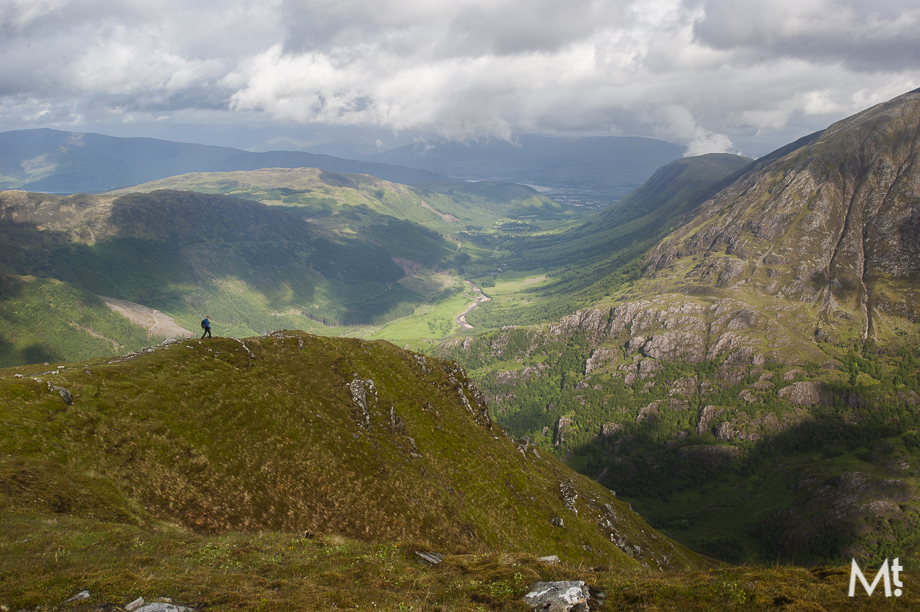 So more rest, elevation and ibuprofen? I got home to three smiley faces and big slab of home made strawberry cream cake. That was all the medicine I needed. 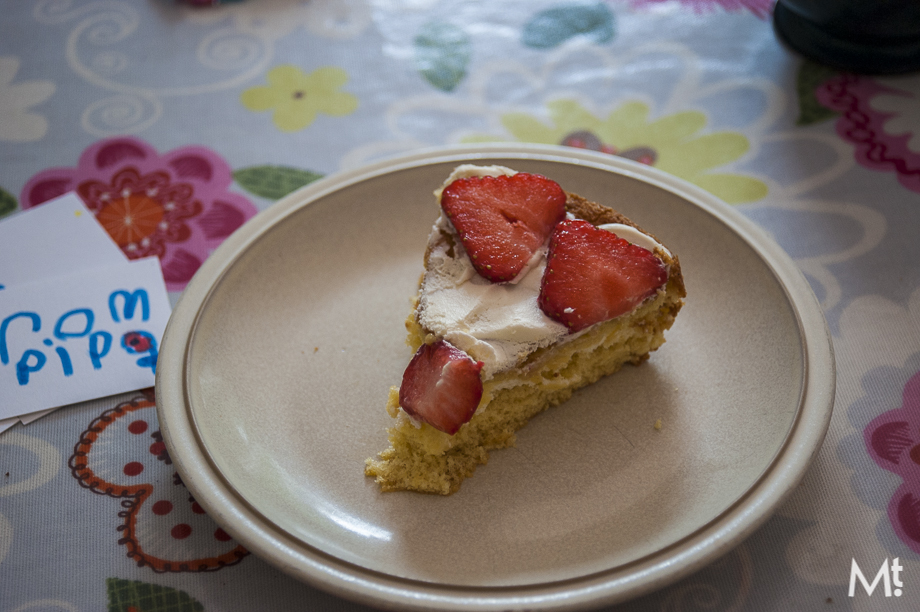 Bigbananafeet
Gotta work this weekend and I'm starting to get cabin fever again but reading those posts put a smile on my face. The hills are starting to look nice and green now.
MT
If I can raise a smile, I'm happy with that!. There is lots of greenery around now but still fair slabs of snow when you get up high, I reckon there will be a few snow patches that last the full year. We really need to get a meet sorted, but the new physio has revised the diagnosis. It's now a suspected torn meniscus and an inflamed ligament too. The next meet I organise is likely to be in the pub!
Bigbananafeet
A Clachaig/real ale meet? Sure we could find some gentler walks in the area with out the ascent/descent.
MT
Ah, I like your thinking. Someone needs to do a guide to pubs for the discerning hill goer. The only problem with the clachaig is the limited camping options, I'm allergic to the red squirrel, but I'm sure we can figure something out....